Int. Meeting Of Styles – The Book About The History

After more than 200 events worldwide and a history going back to 1997 the time has come to finally release a book about the history of the Int. Meeting of Styles, presenting the years from 1997-2006 and the evolution from the legendary “Wall Street Meeting” to “MOS”.

Our partner for the book-project is just right: From here To Fame Publishing together with MOS-Orga. will rease the book in spring 2013! Beside of the MOS- and WSM-History it will feature tons of walls and all the major walls and productions from the early years from 1997-2005. A second part is scheduled to be published in fall 2013 and will follow up from the years 2006-2012.

Meeting Of Styles Vol. I – The Mind Behind 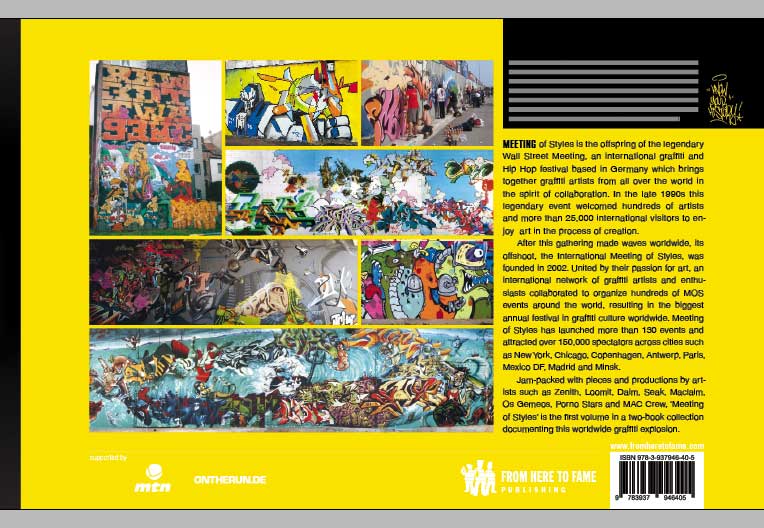 Meeting of Styles’ is the offspring of the legendary ‘Wall Street Meeting’, an international graffiti and Hip Hop event in Germany, where graffiti artists from all over the world gathered in the spirit of collaboration.

In the late 1990s this legendary event welcomed hundreds of artists and more than 25,000 international visitors to enjoy the art in process. After this gathering made waves worldwide, its offshoot, the ‘International Meeting of Styles’, was founded in 2002. Inspired by a passion for art and brought to life by an international network of graffiti artists and enthusiasts, it has become the biggest event in graffiti culture worldwide. Meeting of Styles has launched more than 130 events and attracted more than 150,000 spectators across cities such as New York, Chicago, London, Paris, Buenos Aires, Venice, St. Petersburg and Sofia.